Originally published by the Right Question Institute, in the Teaching + Learning Experts in the Field resources series. Republished here with permission.

As a special education teacher in New York City, I had gotten used to my heterogeneous classroom of kids. Last year, however, I was taken aback by my classroom that consisted of 9 to 12 year olds, with mild to severe disabilities of various kinds.  I had students with: emotional disturbance from broken homes, students with Dyslexia struggling to meet their curious needs, a student with ADHD so severe he could not stay inside the classroom, a student with mild Tourette’s Syndrome, students on the Autism Spectrum, and students with other severe learning disabilities.

This vast variety of disabilities, backgrounds, and age not only affected my teaching and the students’ learning, but also affected the way they communicated with one another.  Students’ friendships were unstable in the classroom, and chemistry among peers was always changing.  Bullies would get bullied, then bully again; the vicious cycle of trying to build a positive classroom community at the beginning of each day and each week continued to stress me out.

Luckily, my school had just trained me on the Question Formulation Technique (QFT).  One of the fifth grade general education teachers and a staff developer have together decided to have all the staff read Make Just One Change and use the QFT throughout the whole year across grade levels. This notion of allowing students to come up with their own questions intrigued me.  I wondered if this technique could be used for the unit I had in mind (I later realized that QFT could be used to teach any lesson or project). After collaborating with the general education teachers who were also delving into the same ELA bundle, we decided to use child labor photographs as a starting off point (the Q Focus).

“We ask as many questions as possible without judgment, and write everything in a form of a question,” I explained to them.  I modeled to my students how to follow this procedure.  This seemed simple enough for my students.  I divided them up into three small groups of 4 and distributed a black and white picture of child laborers.  I gave them the cue to begin.

While my students were engaged in the activity, my paraprofessional and I walked around the classroom and listened to the amazing conversations unfold.  We tried to eavesdrop in each group. 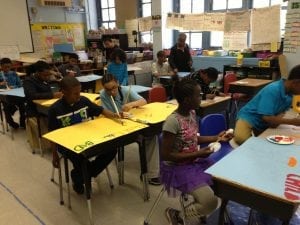 I was astonished.  My students were being civil to one another, following the procedure, asking questions, making connections, and being engaged!  Just within minutes, my students had asked all the deep and thought-provoking questions that the unit would cover.

For the next several weeks that we worked on the child labor unit, my students continued to be excited and engaged.  They were starting to make outside connections without my prompting, even talking about the topic outside of the classroom setting at home and in the lunchroom (every teacher’s dream!).

The final product of my students’ work for the child labor unit did not only consist of answering the dull and exam-driven essay question of the New York state mandated ELA bundle, but also consisted of my students making speeches about anti-child labor, designing T-shirts to get other people engaged, and protesting against child labor in the streets of New York in order to spread their messages.

During our street rally, a stranger came up to one of my students and asked why she was so against child labor and why it concerned her.  She answered, “Child labor is everywhere.  It’s in Mexico and Africa and even in California.  Children should go to school.  They are sad and dying because they aren’t paid enough and they don’t get to eat.”  I was proud and touched by this response, and almost wanted to thank the stranger for stopping to question my students.  At that moment, I knew that my students had learned to think, connect, and believe through learning.

Of all my teaching experiences and memories, this was by far the most exciting and proud unit that I can think of.  My students wrote beautifully in the New York state required ELA bundle; but the take away had nothing to do with their points, grades, or passing the year. 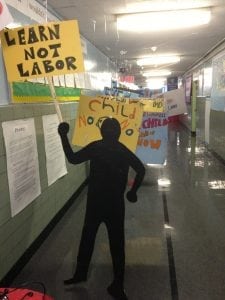 Using the QFT had helped me make a serious, sensitive, and challenging topic come alive for my students. They also had more confidence in themselves, realizing that they can wonder deeply about something and learn to answer these wonderings. They learned about the importance of community and listening to each other, and the responsibility we have to respect one another both inside and outside of school.  Through all this, they began to value themselves and those around them, starting with their own classmates.

I can safely say that every single one of my students, whether they had mild or severe disabilities, were able to grasp the important concepts of this unit and become actively engaged.  My students’ disabilities did not hinder them from learning.  QFT helped these students focus on their own strengths and truly learn the way they are comfortable learning.  I could only hope that other special educators out there who are frustrated by the high demands and lack of resources can give QFT a try – it will forever change your teaching, and the way your students learn.  My students will vouch for me ?