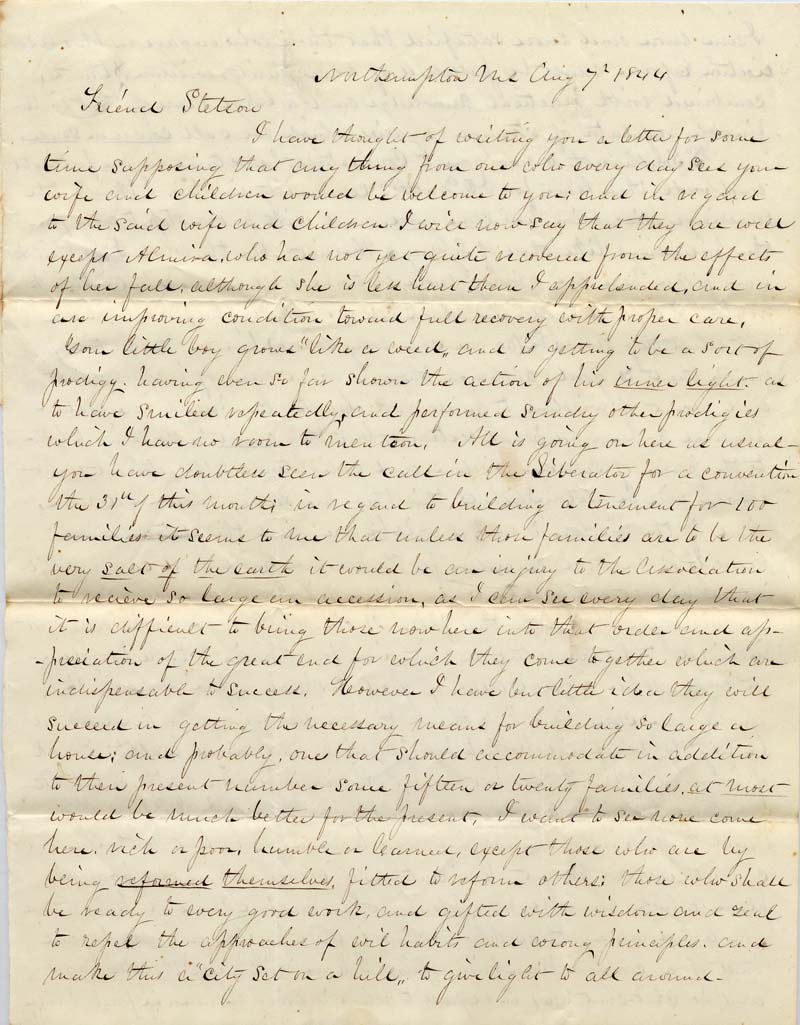 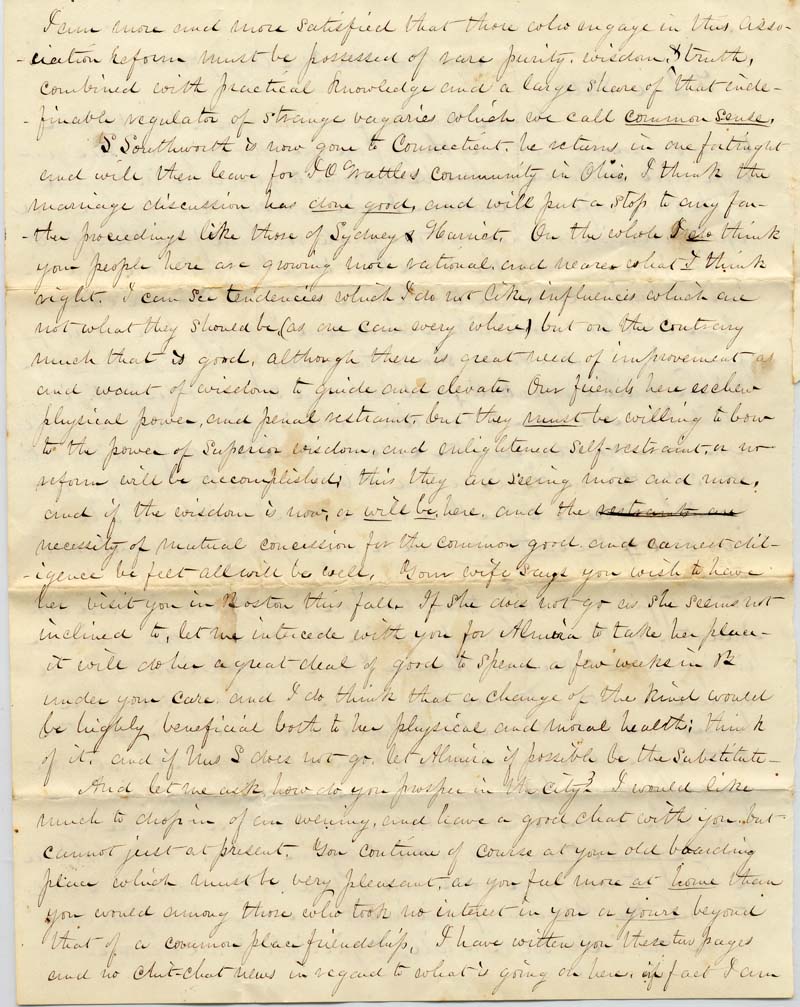 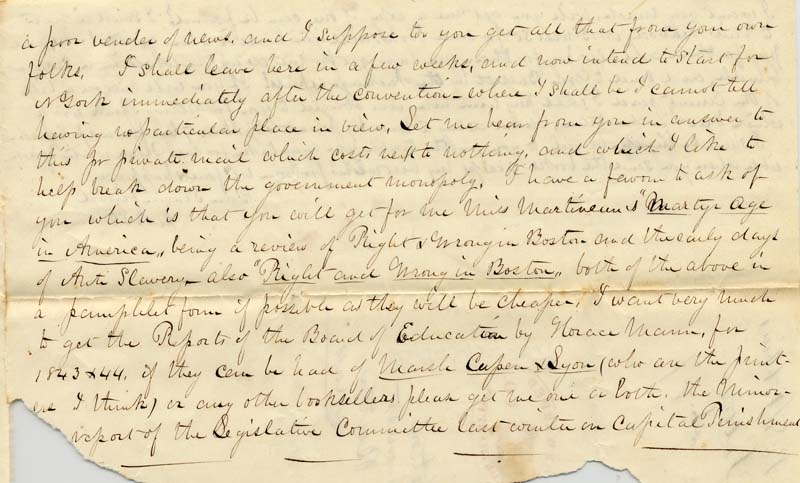 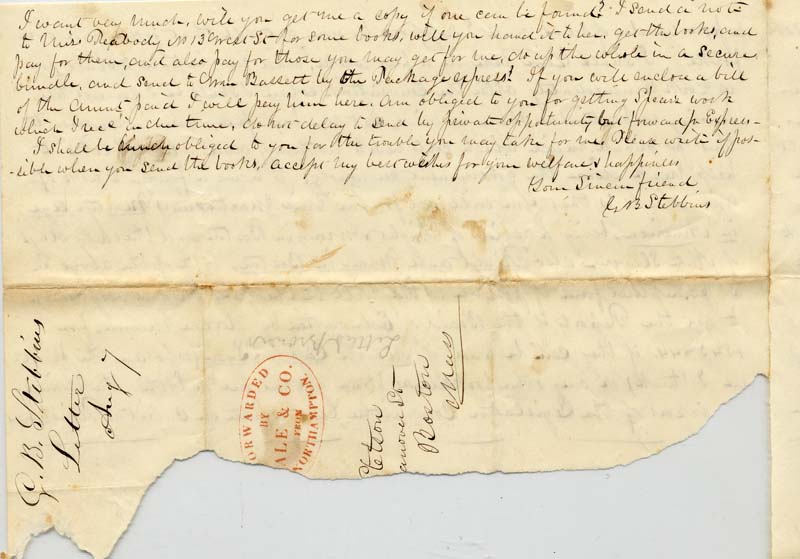 I have thought of writing you a letter for some time supposing that any thing from one who every day sees your wife and children would be welcome to you; and in regard to the said wife and children I will now say that they are well except Almira, who has not yet quite recovered from the effects of her fall, although she is less hurt than I apprehended, and in an improving condition toward full recovery with proper care,

Your little boy grows “like a weed,, and is getting to be a sort of prodigy, having even so far shown the action of his inner light, as to have smiled repeatedly, and performed sundry other prodigies which I have no room to mention, All is going on here as usual-you have doubtless seen the call in the LiberatorThe Liberator was an abolitionist newspaper founded by William Lloyd Garrison in 1831. The Liberator was a weekly publication published in Boston for 35 years. Although it had a small readership, the Liberator gained nationwide notoriety for its demand for the immediate and complete emancipation of all slaves in the United States. for a convention the 31st of this month; in regard to building a tenement for 100 families it seems to me that unless those families are to be the very salt of the earth it would be an injury to the Association to recieve so large an accession, as I can see every day that it is difficult to bring those now here into that order and appreciation of the great end for which they come together which are indispensable to success. However I have but little idea they will succeed in getting the necessary means for building so large a house; and probably, one that should accommodate in addition to their present number some fifteen or twenty families, at most would be much better for the present. I want to see none come here, rich or poor, humble or learned, except those who are by being reformed themselves, fitted to reform others: those who shall be ready to every good work, and gifted with wisdom and zeal to repel the approaches of evil habits and wrong principles, and make this a “city set on a hill,, to give light to all around –

I am more and more satisfied that those who engage in this Association reform must be possessed of rare purity, wisdom & truth, combined with practical knowledge and a large share of that indefinable regulator of strange vagaries which we call common sense.1

S Southworth is now gone to Connecticut, he returns in one fortnight and will then leave for J O Wattles community in Ohio. I think the marriage discussion has done good, and will put a stop to any farther proceedings like those of Sydney & Harriet.2 On the whole I do think your people here are growing more rational, and nearer what I think right. I can see tendencies which I do not like, influences which are not what they should be (as one can every where) but on the contrary much that is good, although there is great need of improvement and want of wisdom to guide and elevate. Our friends here eschew physical power, and penal restraint, but they must be willing to bow to the power of superior wisdom, and enlightened self-restraint, or no reform will be accomplished; this they are seeing more and more, and if the wisdom is now, or will be here, and the restraints are necessity of mutual concession for the common good and earnest diligence be felt all will be well. Your wife says you wish to have her visit you in Boston this fall. If she does not go as she seems not inclined to, let me intercede with you for Almira to take her place – it will do her a great deal of good to spend a few weeks in B under your care, and I do think that a change of the kind would be highly beneficial both to her physical and moral health; think of it, and if Mrs S does not go, let Almira if possible be the subsitute –

And let me ask how do you prosper in the city? I would like much to drop in of an evening, and have a good chat with you, but cannot just at present. You continue of course at your old boarding place which must be very pleasant, as you feel more at home than you would among those who took no interest in you or yours beyond that of a common place friendship. I have witten you these two pages and no chit-chat news in regard to what is going on here, in fact I am a poor vender of news, and I suppose too you get all that from your own folks. I shall leave here in a few weeks, and now intend to start for N York immediately after the convention – where I shall be I cannot tell having no particular place in view. Let me hear from you in answer to this pr private mail which costs next to nothing, and which I like to help break down the government monopoly. I have a favour to ask of you which is that you will get for me Miss Martineau s “Martyr Age in America,, being a review of Right & Wrong in Boston and the early days of Anti Slavery – also “Right and Wrong in Boston,, both of the above in a pamphlet form if possible as they will be cheaper, I want very much to get the Reports of the Board of Education by Horace MannHorace Mann was an education reformer from Massachusetts, who worked to establish free, public, non-sectarian education for every man and woman. Edit, for 1843 & 44, if they can be had of Marsh Capen & Lyon (who are the printers I think) or any other booksellers please get me one or both. the Minor[ity] report of the Legislative Committee last winter on Capital Punishment —

I want very much, will you get me a copy if one can be found?3 I send a note to Miss Peabody No 13 West St for some books, will you hand it to her, get the books, and pay for them, and also pay for those you may get for me, do up the whole in a secure bundle, and send to Wm Bassett by the Package express? If you will enclose a bill of the Amnt paid I will pay him here. Am obliged to you for getting Spear’s work which I recd in due time, do not delay to send by private opportunity but forward pr Express –
I shall be much obliged to you for the trouble you may take for me. Please write if possible when you send the books, accept my best wishes for your welfare & happiness
Your Sincere friend

Alison Noyes
PLC Update for EL Collaborations
Read Post
Rich Cairn
Tools for Digital Literacy
Read Post
Rich Cairn
History eNews from Emerging America - January 19, 2023
Read Post
America and World Fascism: From the Spanish Civil War to Nuremberg and Beyond - ONLINE
View Workshop
What is fascism? Where did it come from? How does it impact human rights? What is anti-fascism and how did it arise? How did ideology shape the Spanish Civil Wa…
Online: Accessing Inquiry for English Learners through Primary Sources
View Workshop
Course runs March-April 2023, and introduces exemplars of best practice pedagogy for English Learners in History and Social Studies classrooms. It demonstrates…
Teach Disability History: We Can and We Must - An imperative for civic learning.
View Workshop
March 8, 2023 - 7-8pm Eastern Time