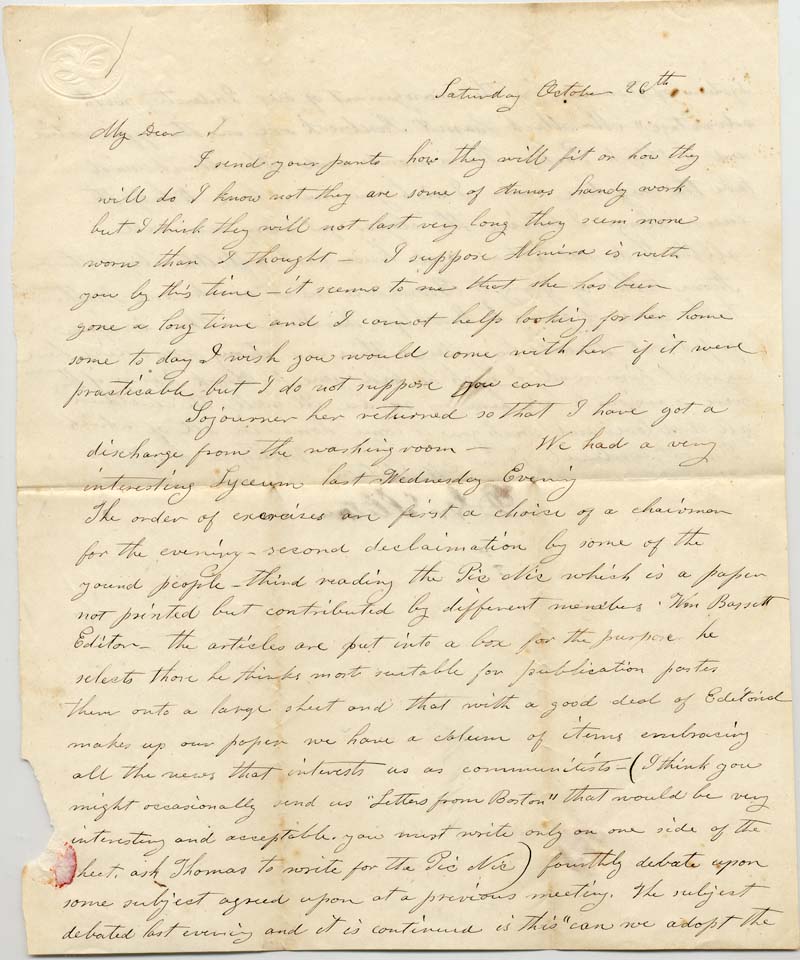 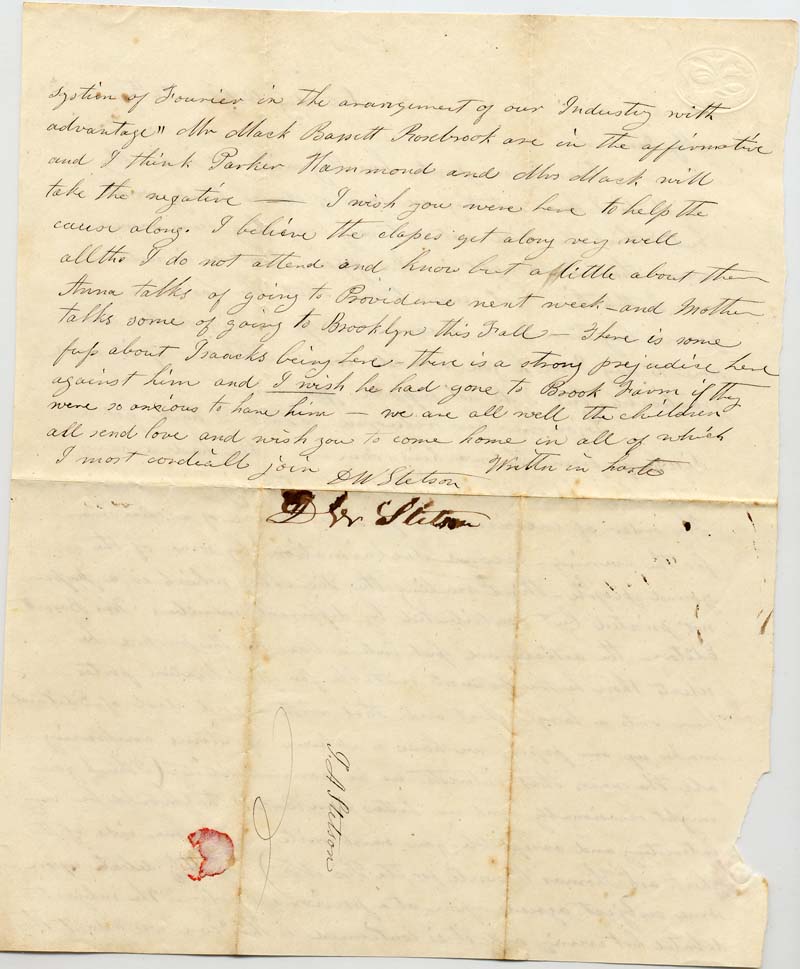 Saturday October 26th [1844]
My Dear
I send your pants how they will fit or how they will do I know not they are some of Anna,s handy work but I think they will not last very long they seem more worn than I thought — I suppose Almira is with you by this time – it seems to me that she has been gone a long time and I cannot help looking for her home some to day I wish you would come with her if it were practicable but I do not suppose you can

Sojourner [has?] returned so that I have got a discharge from the washing room —We had a very interesting Lyceum last Wednesday Evening
The order of exercises are first a choice of a chairman for the evening – second declaimation by some of the young people – third reading the Pic Nic which is a paper not printed but contributed by different members Wm Bassett Editor – the articles are put into a box for the purpose he selects those he thinks most suitable for publication pastes them onto a large sheet and that with a good deal of Editorial makes up our paper we have a colum of items embracing all the news that interests us as communitists – (I think you might occasionally send us “Letters from Boston” that would be very interesting and acceptable.1 you must write only on one side of the [s]heet, ask Thomas to write for the Pic Nic) fourthly debate upon some subject agreed upon at a previous meeting.The subject debated last evening and it is continued is this “can we adopt the systim of Fourier in the arangement of our Industry with advantage” Mr Mack Bassett Rosebrook are in the affirmative and I think Parker Hammond and Mrs Mack will take the negative — I wish you were here to help the cause along. I believe the classes get along very well alltho I do not attend and know but a little about them Anna talks of going to Providence next week – and Mother talks some of going to Brooklyn this Fall -There is some fuss about Isaacks being here – there is a strong prejudice here against him and I wish he had gone to Brook FarmBrook Farm was a transcendentalist utopian communal experiment started by the former Unitarian minister George Ripley at the Ellis farm in West Roxbury, Massachusetts. if they were so anxious to have him2 – we are all well the children all send love and wish you to come home in all of which I most cordiall join Written in haste
DW Stetson

Alison Noyes
Explore Diversity, Equity, and Inclusion in Your Social Studies Classroom
Read Post
Rich Cairn
“Why didn’t they teach me this?” Preliminary Report on the Teaching of Disability History
Read Post
Rich Cairn
History eNews from Emerging America - October 13, 2022
Read Post
Emerging America at the 2022 NCSS Conference
View Workshop
National Council for the Social Studies Conference - December 2-4, 2022 - Philadelphia
Online: Accessing Inquiry for Students with Disabilities through Primary Sources
View Workshop
Fully Online: Course runs January 13 - February 22 , 2023. Social Studies and Humanities pose distinct challenges for struggling learners. Extensive discipline-…
America and World Fascism: From the Spanish Civil War to Nuremberg and Beyond - ONLINE
View Workshop
What is fascism? Where did it come from? How does it impact human rights? What is anti-fascism and how did it arise? How did ideology shape the Spanish Civil Wa…