Wendy Harris guest post: What exactly is a disability?

Emerging America has for many years emphasized the importance of learning and teaching the history of people with disabilities – a history intertwined with the evolution of government and civil rights – as part of our Methods courses on increasing accessibility for students with disabilities. In celebration of our new course on teaching disability history in the K-12 classroom, we invited Wendy Harris, a teacher at a school for the Deaf with expertise in teaching DeafBlind students, to share her thoughts about disability with us.

The stories of Helen Keller (who was deaf and blind) and her teacher Ann Sullivan (who was blind) shaped public perceptions of inclusion in education for much of the 20th century and continue to be influential today. Alexander Graham Bell (sighted and hearing), namesake of Bell Labs and famous for his invention of the telephone, is also known for his role in the debates over deaf education and his opposition to sign language.

The topic of Deafness as a disability gives the opportunity to begin with an exploration of the conception of DISABILITY itself, and the question of what abilities and attributes should be regarded as a disadvantage or an equally valid and valuable difference in experience of the world. This is where Wendy Harris's reflections begin.

What exactly is a disability? This is an important question for students to grapple with as they develop a sense of their own identities and those of others in their community. One way to engage students in this conversation is to ask them to develop a definition of disability. One of the first things I do every morning is put a kind of high-tech prosthetic lenses made of durable plastic onto my corneas (also known as wearing contact lenses). I don’t think most people in the US would consider me to have a disability, even with that fact. However, if I were to wake up each morning and put a high-tech prosthetic limb onto the end of my leg or arm, I think many of these same people would consider me to have a disability.

Here are some questions to ask students as they think about their own definition of disability:

After students have had a chance to bring their own perspectives and knowledge to the room, it may be helpful to bring in some other perspectives. Excerpts from these could be used as part of a jigsaw activity to enrich the discussion. Some sources with perspectives on disability include:

I work in special education, so in theory I know a lot about disability. But, I work in Deaf education. Deaf people in the US have often taken on something of a “split” identity. On one hand, Deaf people are alive and well as a minority cultural and linguistic group and, on a day-to-day basis, people in this community don’t typically think of themselves as disabled. On the other hand, to access information and education, they have to claim a disability to get services under the Individuals with Disability Education Act (IDEA) and the Americans with Disabilities Act (ADA).

To further the discussion and place it into a historical context (and meet some academic standards), allow students to analyze primary sources. A dive into the Library of Congress reveals a selection of interrelated primary and secondary sources about Deaf identity and sign language. Although American Sign Language wasn’t recognized in academia as of equal standing to spoken languages until the 1960s, the community clearly recognized its value before that.

On page 2 of the morning edition of the November 14, 1896 Wichita Daily Eagle there is a piece that says “Deaf Mutes Want the Sign Language Made Compulsory.” An analysis of this source with students could include a discussion of who would want this (and who would oppose it) and why, and if this goal has been achieved. Are there current cultural discussions that are similar? 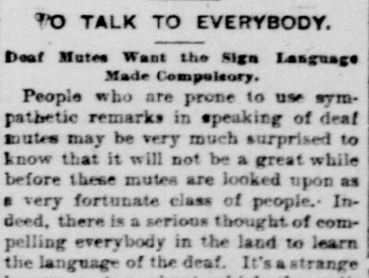 Nearly twenty years later, George Veditz gave a speech on the importance of the preservation of sign language. This was made famous because it was captured on film (the first time sign language was filmed) and the film itself has been preserved. (Translation for signing-impaired:  https://culturasurda.files.wordpress.com/2013/09/preservation-of-sign-language.pdf.) For more historical context, there was a 2016 series hosted by the Library of Congress which included a session on Preserving American Deaf Culture that discusses this film.

As the president of the National Association of the Deaf (NAD) in 1909, Veditz wrote a letter to Alexander Graham Bell explicitly referencing wanting to convince him to change his approach to Deaf people (Bell supported oral methods at the exclusion of sign language). By 1915, Veditz was the Chairman of NAD’s Endowment Fund Committee and, in that role, asked Alexander Graham Bell for a donation for the Fund. He followed up with another letter mentioning the opinion many Deaf adults held of Bell. An analysis of these three letters could focus on the author’s purpose and what literary tools he used to achieve it. We don’t have access to Bell’s responses through the Library. Using the second letter about the endowment from Veditz to Bell, students could work to infer Bell’s response to the first letter. If Veditz knew Bell opposed many things the NAD was fighting for, why might he engage him through these letters?

This duality of feeling an identity as a linguistic minority while being seen as people with a disability is also evident in a discussion from the 2016 Library of Congress series on Deaf Culture: Art and De’VIA.

To broaden this discussion and bring it to today, ask students to synthesize their learning. What does an analysis of these sources tell us about these Deaf people’s own view of their identities and other peoples’ views? How can that inform a larger discussion of disability and identity?

Exploring the definitions of disability, and the history of Deaf identity, provides opportunities for rich class discussion, use of primary sources to gain historical context, and practice considering clashing viewpoints. It’s a valuable lesson, and one that students may find themselves thinking about long after the class period is over.

Wendy Harris is passionate about teaching, social studies, and giving back to the community. She teaches at Metro Deaf School in St. Paul, Minnesota. She has been a classroom teacher for Deaf students of all ages since 2003 and currently splits her teaching duties between high school social studies and teaching braille and other skills to the school’s DeafBlind students ages 2-21. She grew up in Connecticut, earned a BA in American Studies with minors in African American Studies and Latin American Studies from Carleton College in Minnesota and her elementary credential and MA in Bilingual Deaf Education from the University of California, San Diego. Later, she added licenses in secondary social studies and as a teacher of the blind. She has participated in a number of programs including the Teacher for Global Classrooms program (Colombia), Fund for Teachers Fellowship (DeafBlind education in Tanzania and Kenya), National History Day Master Teacher Program, Minnesota Teacher Leadership Institute, and the National Center for the Humanities Teacher Advisory Council.