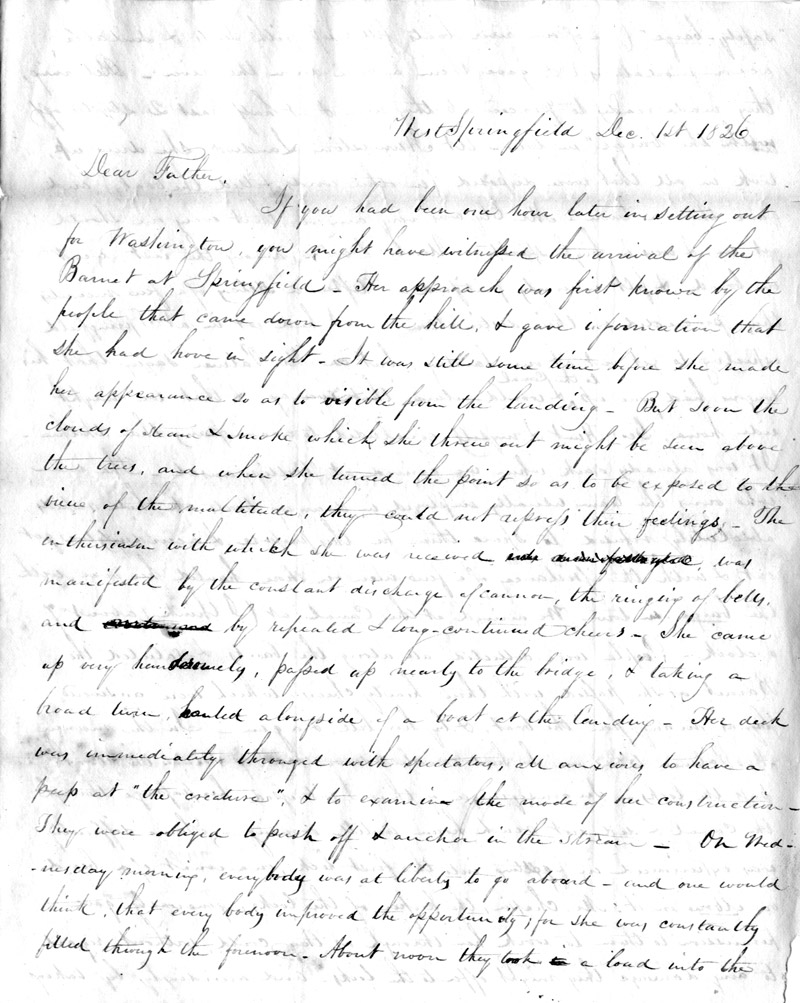 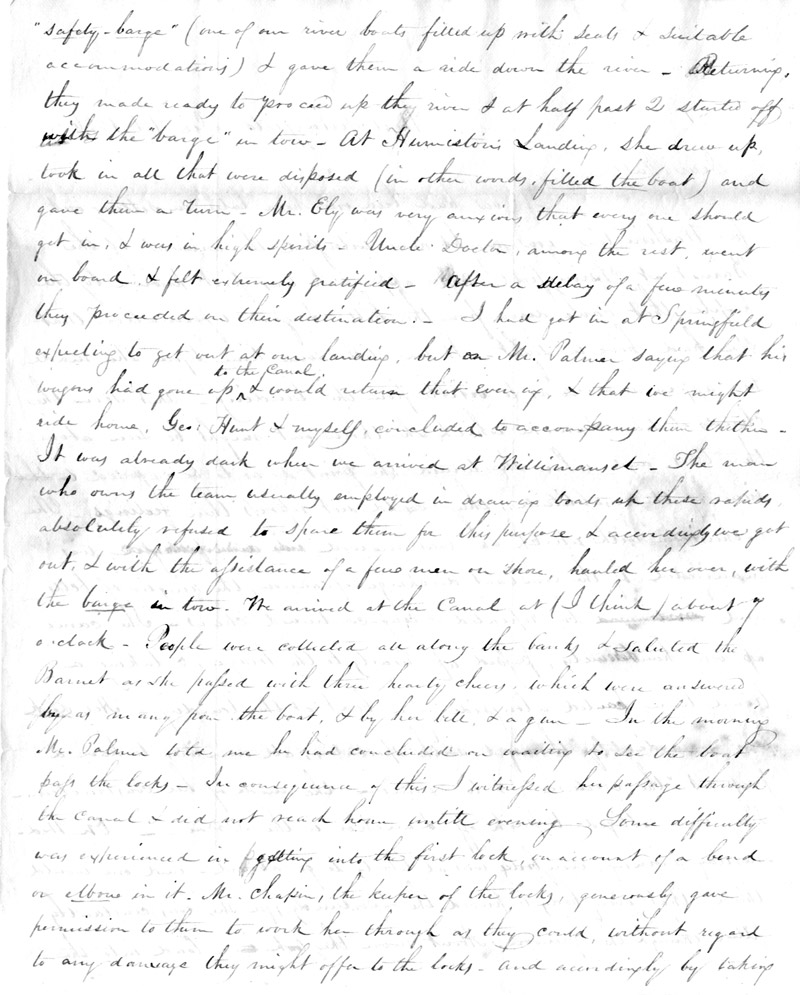 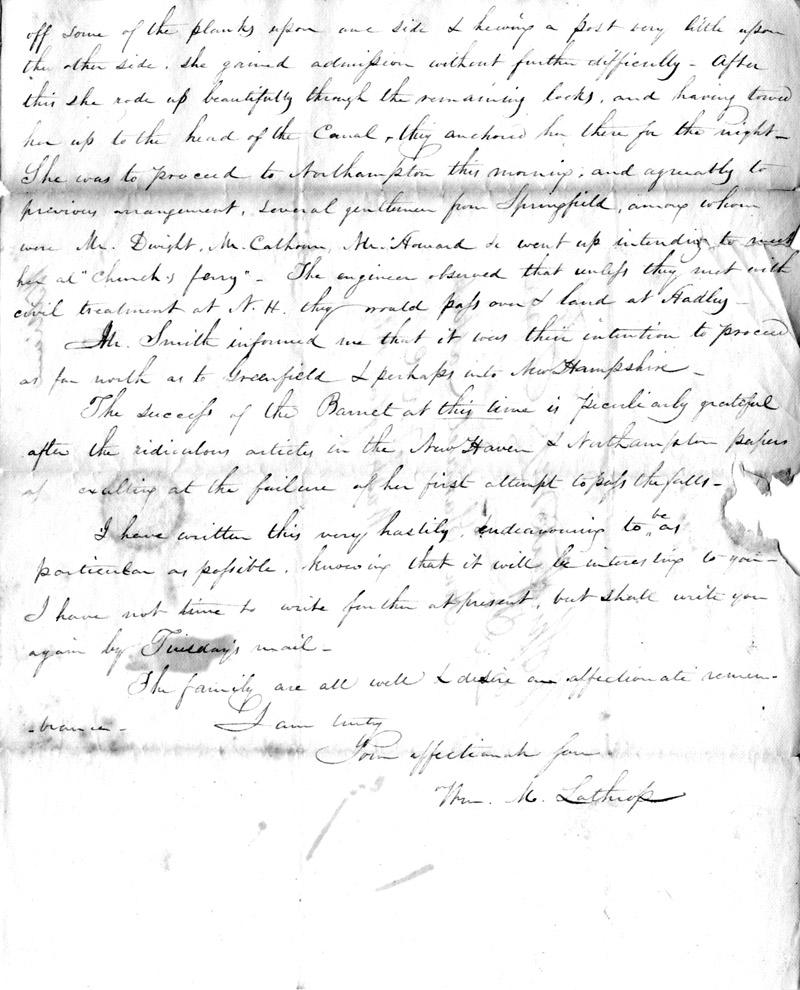 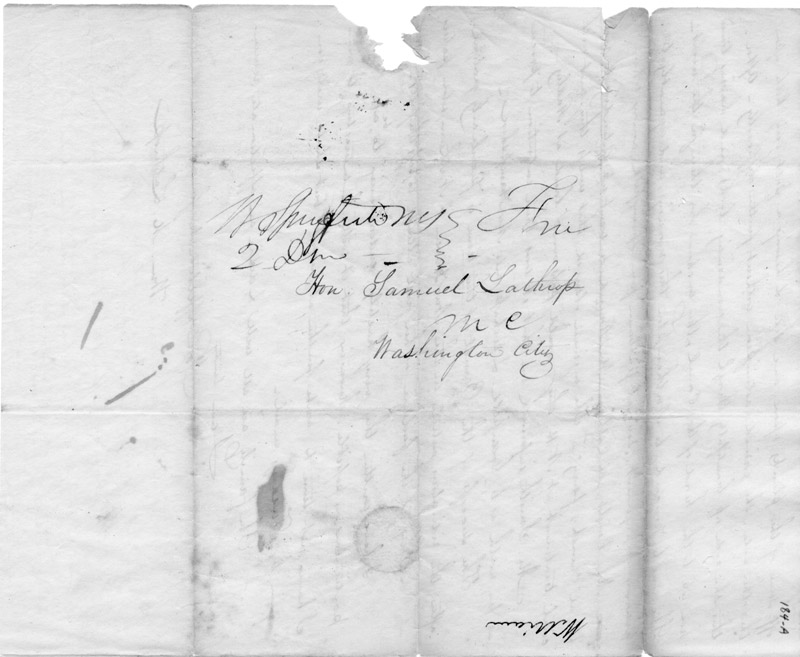 Dear Father,
If you had been one hour later in setting out for Washington, you might have witnessed the arrival of the Barnet at Springfield. Her approach was first known by the people that came down from the hill and gave information that she had hove in sight. It was till some time before she made her appearance so as to visible from the landing. But soon the clouds of steam and smoke which she threw out might be seen above the trees, and when she turned the point so as to be exposed to the view of the multitude, they could not suppress their feelings. The enthusiasm with which she was received was manifested by the constant discharge of cannon, the ringing of bells, and by repeated and long-continued cheers.

She came up very handsomely, passed up nearly to the bridge and taking a head wind, cauled [?] alongside of a boat at the landing. Her deck was immediately thronged with spectators, all anxious to have a peep at “the creature” and to examine the mode of her construction. They were obliged to push off and anchor in the stream. On Wednesday morning, everybody was at liberty to go aboard – and one would think, that everybody improved the opportunity, for she was constantly filled through the afternoon. About noon they took a load into the “safety-barge” (one of our river boats fitted up with seats and suitable accommodations) and gave them a ride down the river. Returning, they made ready to proceed up the river and at half past two started off with the “barge” in tow. At Humiston’s [?] landing, she drew up, took in all that were disposed [in other words, filled the boat] and gave them a turn. Mr. Ely was very anxious that everyone should get in and was in high spirits. Uncle Doctor, among the rest, went on board and felt extremely gratified. After a delay of a few minutes they proceeded on their destination.

I had got in at Springfield expecting to get out at the landing, but on Mr. Palmer saying that his wagons had gone up to the Canal and would return that evening and that we might ride home. Gen. Hunt and myself concluded to accompany them [—–] . It was already dark when we arrived at Willimansett. The man who owns the team usually employed in drawing boats up these rapids absolutely refused to spare them for this purpose and accordingly we got out and with the assistance of a few men on shore, hauled her over, with the barge in tow. We arrived at the Canal at (I think) about 7’o clock. People were collected all along the banks and saluted the Barnet as she passed with three hearty cheers, which were answered by as many from the boat and by her bell and a gem [?].

In the morning Mr. Palmer told me he had concluded on waiting to see the boat pass the locks. In consequence of this I witnessed her passage through the canal and did not reach home until evening. Some difficulty was experienced in getting into the first lock, on account of a bend or elbow in it. Mr Chapin, the keeper of the locks, generously gave permission to them to work her through as they could, without regard to any damage they might offer to the locks. And accordingly by taking off some of the planks upon one side and hewing a post very little upon the other side, she gained admission without further difficulty. After this, she rode up beautifully through the remaining locks and having towed her up to the head of the Canal, they anchored her there for the night. She was to proceed to Northampton this morning, and arguably to previous arrangement, several gentlemen from Springfield, among whom were Mr. Dwight, Mr. Calhoun, Mr. Howard went up intending to reach [?] her at “church’s ferry” The engineer observed that unless they met with civil treatment at N.H. [Northampton] they would pass over and land at Hadley.

Mr. Smith informed me that it was their intention to proceed as north as to Greenfield and perhaps into New Hampshire.
the success of the Barnet at this time is peculiarly grateful after the ridiculous articles in the New Haven and Northampton papers exalting at the failure of her first attempt to pass the falls.
I have written this very hastily, endeavoring to be as particular as possible, knowing that it will be interesting to you. I have not time to write further at present, but shall write you again by Tuesday’s mail.
The family are all well and desire an affectionate remembrance.