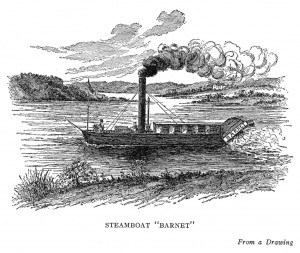 Built between 1824 and 1826 by Brown and Bell shipbuilders of New York, the steamboat Barnet was seventy-five feet long and displaced only twenty-two inches of water. This extremely shallow draft allowed the vessel to navigate the rapids at Enfield Falls.

At Warehouse Point the combination of unfavorable wind and insufficient power prevented Barnet from completing the trip up the falls in Enfield.

Workers strengthened the engine and on its second voyage, with the help of thirty poleman on flatboats, Barnet navigated the falls and continued up the Connecticut River, stopping at Northampton and Greenfield in Massachusetts, and at Brattleboro in Vermont. When Barnet reached Bellows Falls, canal workers discovered that the boat was too wide to fit through the locks, and the vessel returned to Enfield.

Barnet failed to reach the goal of Vermont (a total trip of 180 miles through five falls), but demonstrated the viability of commercial steamboat operations on the upper part of the river.