Celebrate Spring with Pi in the Social Studies

Pi Day has become a celebration of growing festivity in many American educational settings. March 14, as expressed 3.14 in ‘month.day’ notation, is an opportunity to talk about π*, to have a celebration that connects to science and geometry, and to brighten the muddy days of March with the pleasures of pie.

How do history and social studies classrooms get in on the fun? Teachers of Ancient History can focus on the early origins of pi, from King Solomon to Leonardo da Vinci. A great primary source is an image of the 1550 BC mathematics text, written on papyrus, in the British Museum.

Social geography teachers can pick up the point that celebrating Pi day on March 14 is, to borrow a joke from a pi day essay on the historical roots of the constant, ‘As American as apple pie,” since the US is one of the few countries that transcribe dates numerically starting with the month. Pi day can connect to a quick lesson on how dates and time are recorded across the world, and how those conventions have changed in different eras.

American history teachers could connect Pi day with what is known about early American leaders’ studies in mathematics, with sources ranging from the Library of Congress’s collections of George Washington’s copybooks 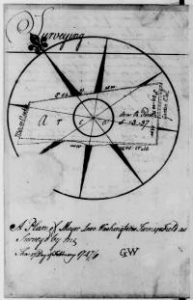 Teachers of 20th century history can latch onto the detail that March 14 is the birthday of Albert Einstein, and tie the day to the ways that Einstein’s work connected to the atomic age and relativity. Einstein-look-alike contests, whether by faculty or students, offer a silly way to build excitement and visibility. The Travel Diaries of Albert Einstein: The Far East, Palestine, and Spain, written in 1922 and 1923 and published in 2018, offers an opportunity for older students to examine Einstein’s reactions to what he was seeing in the context of 1920s world history, and to discuss his own growth and development, from his many racist comments in the 1920s diaries to his 1940s denunciation of white racisim in confronting US race relations.

I am indebted to the essay of Tara Holm, and Library of Congress blog posts by Stephanie Hall and Jennifer Harbster for ideas to share and paths to follow. Please share your own ideas with me as I build a portfolio of Pi-day resources for the years to come.

*π = pi: the mathematical constant (expressed with the Greek letter for p) used to calculate area and perimeter of circles,