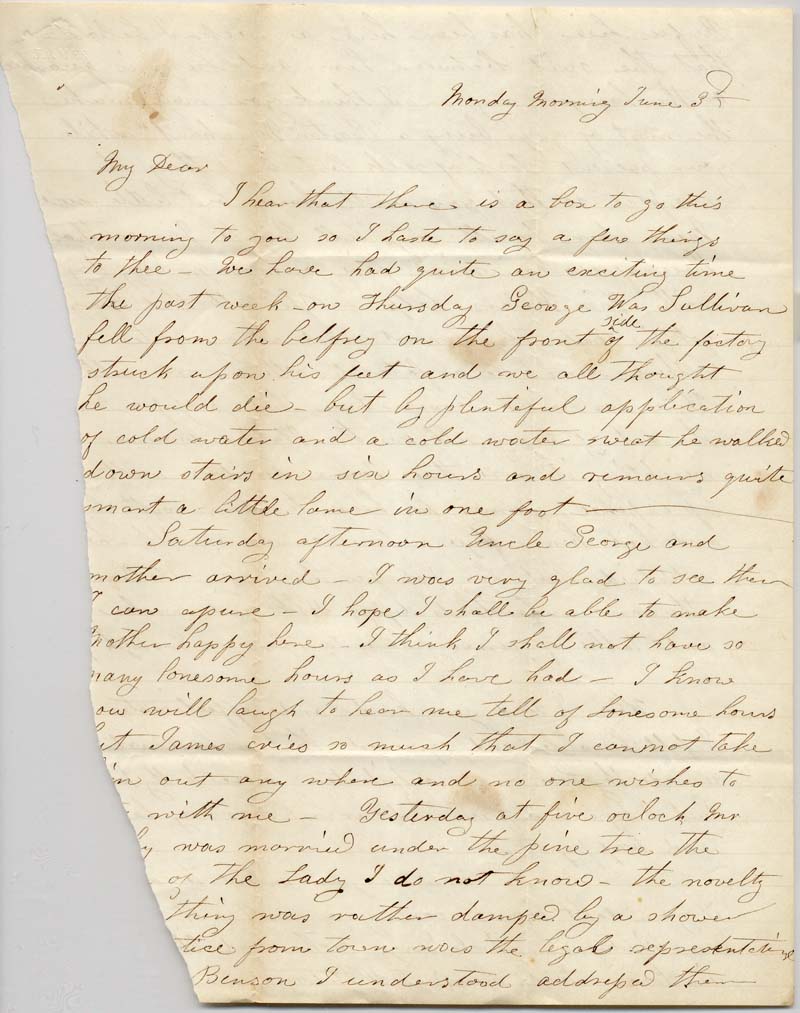 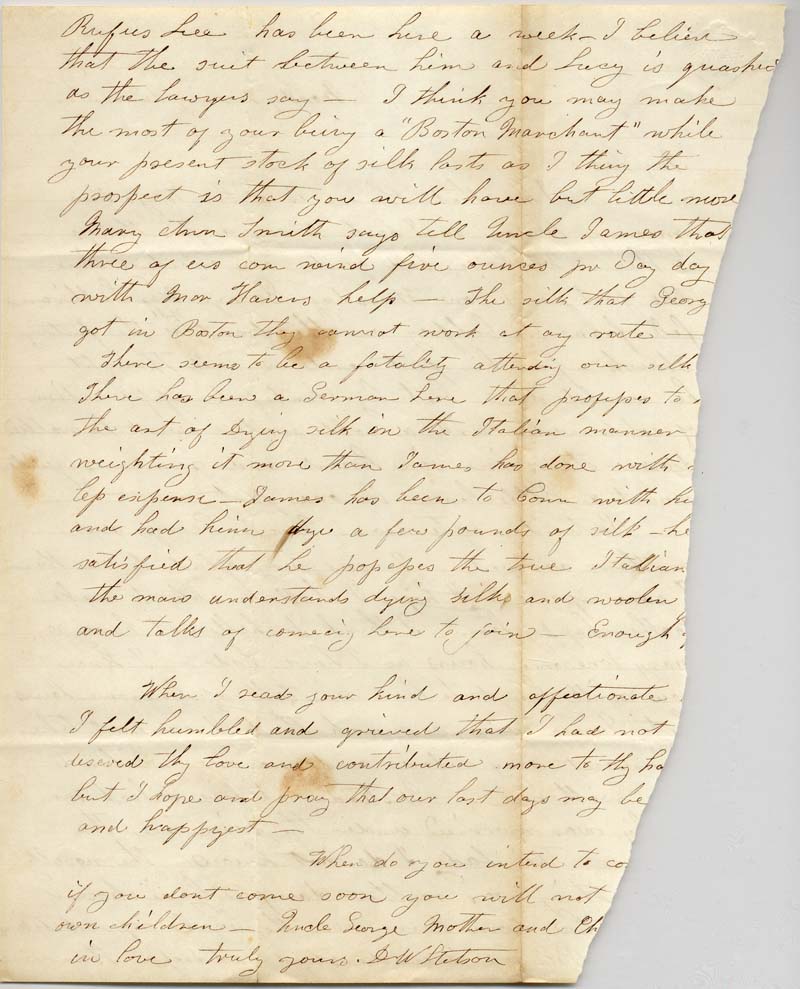 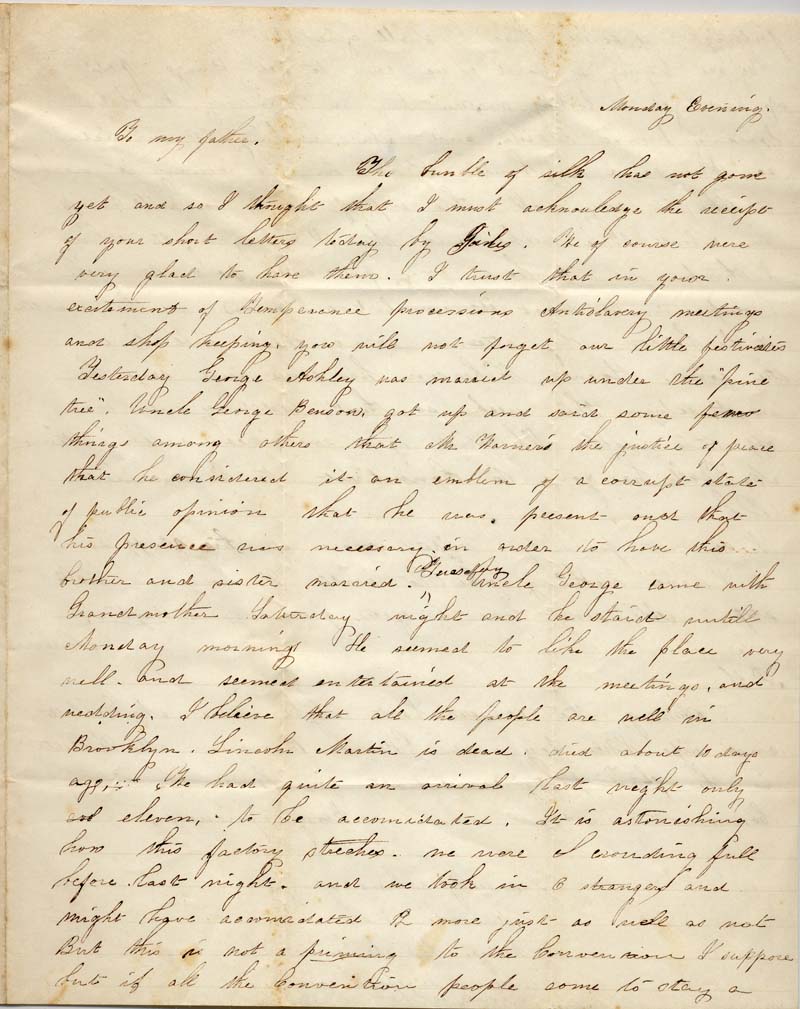 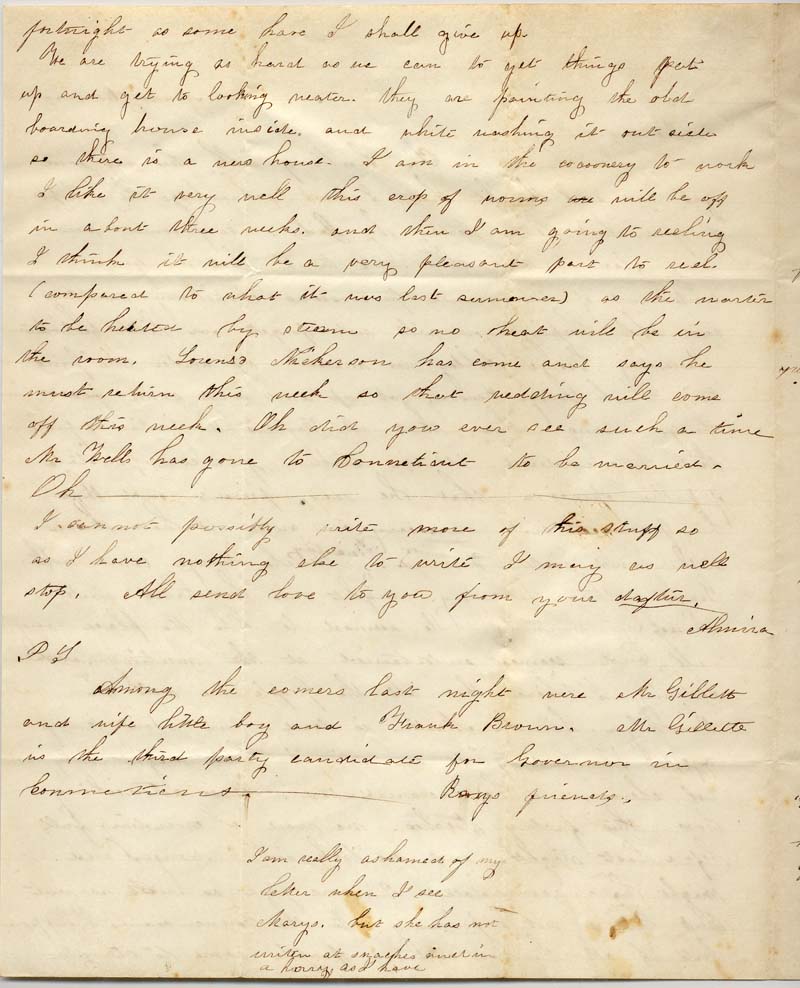 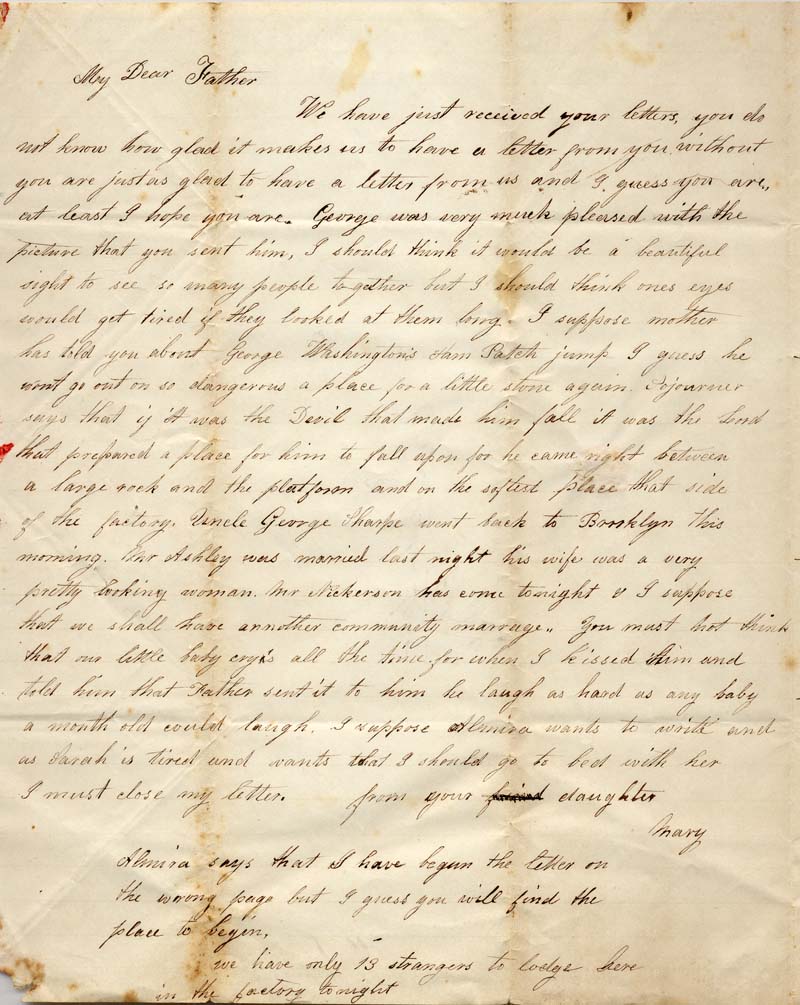 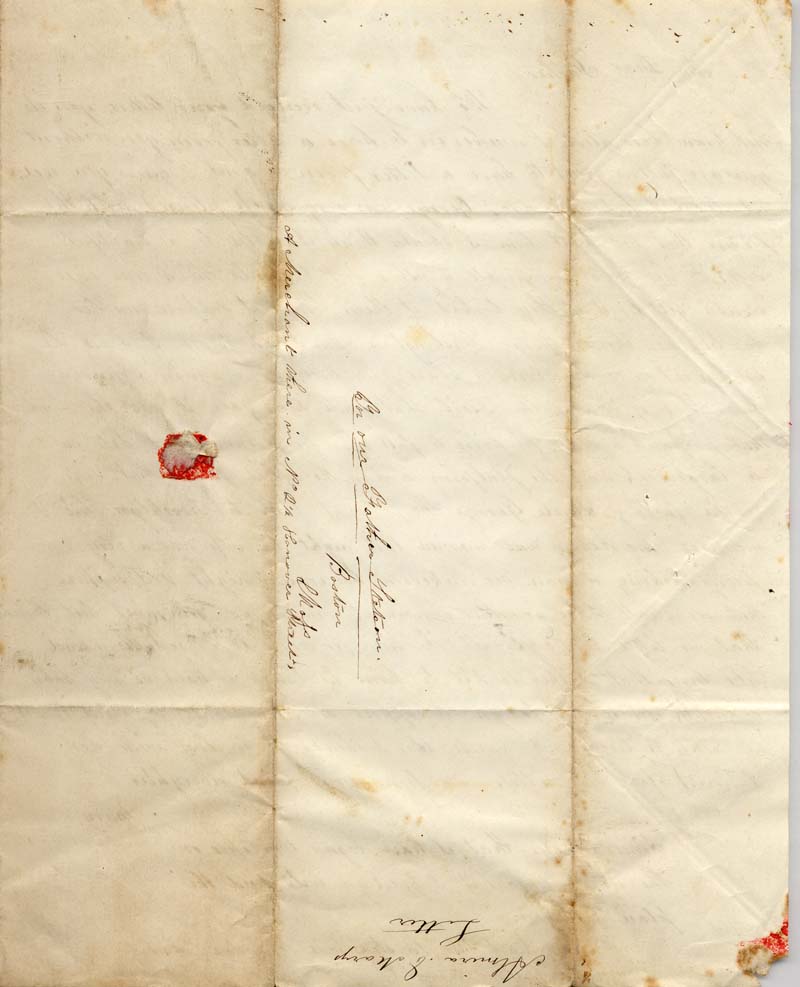 My Dear
I hear that there is a box to go this morning to you so I haste to say a few things to thee – we have had quite an exciting time the past week – on Thursday George Was Sullivan fell from the belfrey on the front side of the factory struck upon his feet and we all thought he would die- but by plentiful application of cold water and a cold water sweat he walked down stairs in six hours and remains quite [s]mart a little lame in one foot —1
Saturday afternoon Uncle George2 and mother arrived – I was very glad to see them I can assure – I hope I shall be able to make Mother happy here – I think I shall not have so/// many lonesome hours as I have had – I know/// [y]ou will laugh to hear me tell of lonesome hours/// [bu]t James cries so much that I cannot take/// [hi]m out any where and no one wishes to///[ ? ] with me – Yesterday at five oclock Mr/// [Ashley] was married under the pine tree the/// [name?] of the Lady I do not know – the novelty/// [of the] thing was rather damped by a shower/// [Mr. Warner jus]tice from town was the legal representative/// [ ? ] Benson I understood addressed them3

Rufus Lee has been here a week – I believe that the suit between him and Lucy is quashed as the lawyers say4 — I think you may make the most of your being a “Boston Marchant” while your present stock of silk lasts as I [think?] the prospect is that you will have but little more/// [ … ] Mary Ann Smith says tell Uncle James that three of us can wind five ounces per Day day with Mr Havens help — The silk that Georg///[e] got in Boston they cannot work at any rate —5
There seems to be a fatality attending our silk/// [ … ] There has been a German here that professes to/// [ … ] the art of Dying silk in the Italian manner/// [ … ] weighting it more than James has done with/// [ … ] less expense – James has been to Conn with hi///[m?] and had him dye a few pounds of silk – he/// [is?] satisfied that he possesses the true Italian/// [ … ] the man understands dying silks and woolen/// [ … ] and talks of comeing here to join6 – Enough/// [ ]

When I read your kind and affectionate/// [letter?] I felt humbled and grieved that I had not/// [ … ] deseved thy love and contributed more to thy ha///[ppiness?] but I hope and pray that our last days may be///[ … ] and happyest –

8. Almira B. Stetson and Mary Stetson to James A. Stetson

To my father,
The bundle of silk has not gone yet and so I thought that I must acknowledge the receipt of your short letters today by Giles.7 We of course were very glad to have them. I trust that in your excitement of TemperanceReform that targeted alcohol use in society. Reforms encouraged people to limit their alcohol consumption. Many reformers also advocated for the prohibition of alcohol in their communities, states, and the nation. processions Antislavery meetings and shop keeping, you will not forget our little festiveitis Yesterday George Ashley was married up under the “pine tree”. Uncle George Benson, got up and said some few things among others that Mr Warner’s the justice of peace that he considered it an emblem of a corrupt state of public opinion that he was present and that his presence was necessary in order to have this brother and sister married. Tuesday Uncle George8 came with Grandmother Saturday night and he staid untill Monday morning He seemed to like the place very well, and seemed entertained at the meetings, and wedding. I believe that all the people are well in Brooklyn. Lincoln Martin is dead. died about 10 days ago. We had quite an arrival last night only evl eleven, to be accomidated. It is astonishing how this factory streches. we were crouding full before last night, and we took in 6 strangers and might have accomidated 12 more just as well as not But this is not a priming to the Convention I suppose but if all the Convention people come to stay a fortnight as some have I shall give up.9

We are trying as hard as we can to get things put up and get to looking neater. they are painting the old boarding house inside and white washing it out side so there is a new house. I am in the cocoonery to work I like it very well this crop of worms are will be off in about three weeks. and then I am going to reeling I think it will be a very pleasant part to reel, (compared to what it was last summer) as the warter to be heated by steam so no heat will be in the room. Lorenso Nickerson has come and says he must return this week so that wedding will come off this week.10 Oh did you ever see such a time Mr Wells has gone to Conneticut to be married.11 Oh ———————————

I can not possibly write more of this stuff so as I have nothing else to write I may as well stop. All send love to you from your daftur,
Almira
P S

Among the comers last night were Mr Gillett and wife little boy and Frank Brown. Mr Gillette is the third party candidate for Governor in Conneticut — Roxys friends.

I am really ashamed of my letter when I see Marys. but she has not writen at snaches and in a hurry, as I have

My Dear Father
We have just received your letters, you do not know how glad it makes us to have a letter from you without you are just as glad to have a letter from us and I guess you are, at least I hope you are. George was very much pleased with the picture that you sent him, I should think it would be a beautiful sight to see so many people together but I should think ones eyes would get tired if they looked at them long. I suppose mother has told you about George Washington’s Sam Patch jump I guess he wont go out on so dangerous a place for a little stone again. Sojourner says that if it was the Devil that made him fall it was the Lord that prepared a place for him to fall upon for he came right between a large rock and the platform and on the softest place that side of the factory.12 Uncle George Sharpe went back to Brooklyn this morning. Mr Ashley was married last night his wife was a very pretty looking woman. Mr Nickerson has come tonight & I suppose that we shall have annother community marrage.. You must not think that our little baby crye’s all the time for when I kissed him and told him that Father sent it to him he laugh as hard as any baby a month old could laugh. I suppose Almira wants to write and as Sarah is tired and wants that I should go to bed with her I must close my letter. from your friend daughter
Mary

Almira says that I have begun the letter on the wrong page but I guess you will find the place to begin,

Addressed: For our Father Stetson. / Boston / Mass / A Merchant there in No 2 1/2 Hanover Street.

Alison Noyes
PLC Update for EL Collaborations
Read Post
Rich Cairn
Tools for Digital Literacy
Read Post
Rich Cairn
History eNews from Emerging America - January 19, 2023
Read Post
America and World Fascism: From the Spanish Civil War to Nuremberg and Beyond - ONLINE
View Workshop
What is fascism? Where did it come from? How does it impact human rights? What is anti-fascism and how did it arise? How did ideology shape the Spanish Civil Wa…
Online: Accessing Inquiry for English Learners through Primary Sources
View Workshop
Course runs March-April 2023, and introduces exemplars of best practice pedagogy for English Learners in History and Social Studies classrooms. It demonstrates…
Teach Disability History: We Can and We Must - An imperative for civic learning.
View Workshop
March 8, 2023 - 7-8pm Eastern Time