America and World Fascism: From the Spanish Civil War to Nuremberg and Beyond - ONLINE 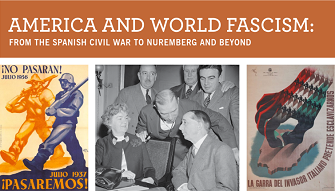 What is fascism? Where did it come from? How does it impact human rights? What is anti-fascism and how did it arise? How did ideology shape the Spanish Civil War (the setting for the Ernest Hemingway novel, For Whom the Bell Tolls) and WWII? What legacies did those wars pass on in the decades since–in Spain, the U.S., Europe, and globally?

For a century the world has experienced ideological–and actual–war between fascism and democratic-republicanism, anarchism, communism, and socialism. Three years before World War II, 3,000 idealistic American volunteers fought in the Abraham Lincoln Brigade beside Spain's government against General Franco's fascist rebels. Examine the history of world fascism from its peak in the Spanish Civil War (1936-1939) and WWII in Europe (1939-1945) through the Nuremberg Trials (1945-1946) to today.

Study and discuss the impact of fascist thought and action on human rights through that decade of war, to the Universal Declaration of Human Rights. Consider the post-WWII era, with effects that reach into neo-Nazi, White Supremacist, and other present-day far-right movements in Europe, America, and around the globe that propagate nativism, xenophobia, nationalism, and hate. How does the study of history help us understand these movements? To what extent are we witnessing a return of fascism as it emerged in the first half of the twentieth century? What is different today? And what can we learn from the past eighty years of antifascist struggle?

This workshop is offered in English with a Spanish language cohort and features resources and free curriculum from: the Library of Congress and the Abraham Lincoln Brigade Archives.

Browse a Syllabus from an earlier offering of the course.

22.5 PDPs or 1 graduate credit will be awarded to participants upon completion of this training. Graduate credit is available through Westfield State University at an additional cost of $125.

*There is also an optional Spanish live webinar on April 7, 5:15pm - 6:30pm. All sessions will be recorded. Training cost reduced thanks to support from the Abraham Lincoln Brigade Archives.