Dear Father,
The last accounts of the steam boat Barnet left her at Greenfield, where she arrived Saturday evening. She arrived at Northampton Friday afternoon and staid there that night and left them Saturday morning. An alteration had been made in the machinery, while she was at N.H. which increased her speed materially. You [—-] (I suppose) that they were disappointed in the power of the engine and that instead of her proving a swift boat, she sailed very slowe. Mr. Palmer told me, however, that above Northampton she went at the rate of 9 miles an hour, having her barge in tow. He left Greenfield before it had been ascertained whether she would be able to pass those locks – the general impression, however, was unfavourable. Should they succeed in passing them their intention was to proceed to Brattleboro and perhaps to Bellows Falls. otherwise to return immediately down the river, in which case they will probably pass here today.
The Court of Common Pleas rose on Wednesday eve and I understand…. 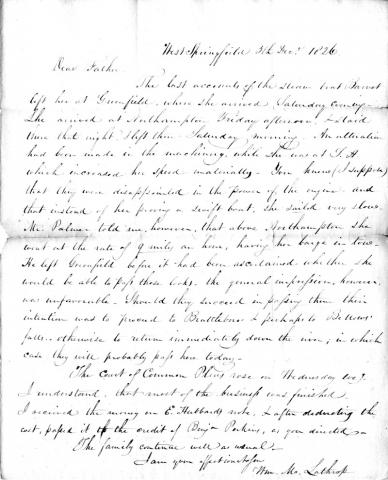