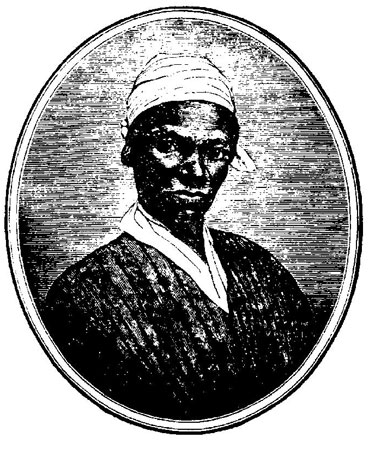 Sojourner Truth was born Isabella Baumfree as a slave in Ulster County, New York in 1797. Like Frederick Douglass, the first several years of her life consisted of being transferred from owner to owner. During this period, Truth had five children. New York began to legislate against slavery in 1799, but the system was not abolished until 1827. The year prior, Truth and her infant daughter escaped a cruel “master.” Truth took refuge with the Van Wagener’s, a Quaker family, until the New York State Emancipation Act went into effect. In 1829, Truth moved to New York City where she worked as a domestic laborer. She began attending church and became a devout Christian. In 1843, she took the name Sojourner Truth, in reference to her evangelical beliefs, and started a career as an itinerant preacher.

In 1843, Truth joined the Northampton Association for Education and Industry in present-day Florence, Massachusetts. She lived in the factory boarding house, and was appointed the director of the laundry where she oversaw white men and women. At the Association, Truth met William Lloyd Garrison, Frederick Douglass, and David Ruggles, all of whom influenced her beliefs on abolitionism and women’s rights.

In 1850, Truth dictated her story to Olive Gilbert; unlike Douglass, Truth had never learned to read, and remained illiterate her entire life. Garrison published her autobiography as “The Narrative of Sojourner Truth: A Northern Slave.” As her book sold more copies, Truth traveled to anti-slavery society meetings and women’s rights conventions across the northern half of the country, selling cards of her image in order to support herself. Although there is no direct evidence that she gave the infamous “Arn’t I A Woman?” speech, it’s likely that she did deliver speeches that shared similar sentiments about the role of blacks in the suffrage movement.

After the Civil War, Truth continued to advocate for African-Americans; she worked at both the Freedmen’s Hospital and the National Freedmen’s Relief Association in Washington, DC. In 1867, she moved to Battle Creek, Michigan where she continued to fight for various reforms. She died at home in 1883.

Links
Sojourner Truth Statue Committee: Provides an overview of her life.  Describes the search to identify and confirm her house in Florence.
http://www.sojournertruthmemorial.org

Relevant Date(s)
1797 - 1893
Northampton Association Member
Yes
Alison Noyes
PLC Update for EL Collaborations
Read Post
Rich Cairn
Tools for Digital Literacy
Read Post
Rich Cairn
History eNews from Emerging America - January 19, 2023
Read Post
America and World Fascism: From the Spanish Civil War to Nuremberg and Beyond - ONLINE
View Workshop
What is fascism? Where did it come from? How does it impact human rights? What is anti-fascism and how did it arise? How did ideology shape the Spanish Civil Wa…
Online: Accessing Inquiry for English Learners through Primary Sources
View Workshop
Course runs March-April 2023, and introduces exemplars of best practice pedagogy for English Learners in History and Social Studies classrooms. It demonstrates…
Teach Disability History: We Can and We Must - An imperative for civic learning.
View Workshop
March 8, 2023 - 7-8pm Eastern Time