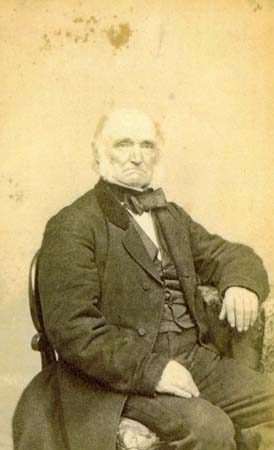 James A. Stetson was born in 1801. He moved to Brooklyn, Connecticut in 1824 from Massachusetts to set up shop as a chaise- and harness-maker. Stetson played the bass viol for the Unitarian church choir, and attracted the attention of Dolly Witter. The couple married in 1827. Stetson’s shop had filled a need in Brooklyn when he first arrived, but in 1825 the shop had caught fire and burned to the ground. Although it was back up and running by the time of James’ marriage to Dolly, it was never as successful. Stetson’s debt increased, and after the financial crisis of 1837, he was forced to find an alternate way to support his family. The Stetsons had been increasingly drawn into the local abolitionist movement; many of their closest friends were leaders in anti-slavery societies.

Relevant Date(s)
1801 - 1893
Northampton Association Member
Yes
Alison Noyes
PLC Update for EL Collaborations
Read Post
Rich Cairn
Tools for Digital Literacy
Read Post
Rich Cairn
History eNews from Emerging America - January 19, 2023
Read Post
America and World Fascism: From the Spanish Civil War to Nuremberg and Beyond - ONLINE
View Workshop
What is fascism? Where did it come from? How does it impact human rights? What is anti-fascism and how did it arise? How did ideology shape the Spanish Civil Wa…
Online: Accessing Inquiry for English Learners through Primary Sources
View Workshop
Course runs March-April 2023, and introduces exemplars of best practice pedagogy for English Learners in History and Social Studies classrooms. It demonstrates…
Teach Disability History: We Can and We Must - An imperative for civic learning.
View Workshop
March 8, 2023 - 7-8pm Eastern Time