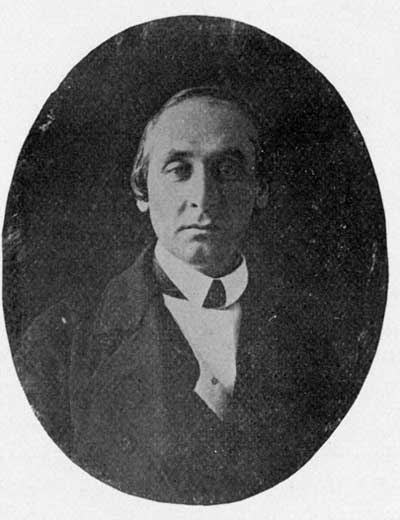 George W. Benson was born in Providence, Rhode Island in the early 1800s. His father was a merchant and prominent leader in the Providence anti-slavery movement. Benson worked as a partner in a wholesale wool and leather firm, but gave that up to move to Brooklyn, Connecticut to try his hand at farming. In 1833, he married James Stetson’s sister Catharine.

In 1834, Benson’s sister Helen Eliza Benson married William Lloyd Garrison. Partly due to these family connections, the Benson family became increasingly involved in New England anti-slavery activities. By 1840, it became clear that the farm in Connecticut was not adequately supporting the family. So in 1841, the Bensons moved to Northampton. George W. Benson, Samuel Hill, and two other men purchased the buildings and property of the bankrupt Northampton Silk Company and formed the Northampton Association of Education and Industry.

While in Northampton, the Benson family lived in a house on Association property. William Lloyd Garrison would often stay with them during the summer months. When the Association dissolved, Benson bought the brick factory and formed the Bensonville Manufacturing Company. Sojourner Truth lived with the Benson family during this period. When the company failed in 1849, the Bensons moved to New York to avoid George’s accumulated debts. Eventually, they made their way to Kansas where Benson resumed farming.

Relevant Date(s)
1808 - 1879
Northampton Association Member
Yes
Alison Noyes
PLC Update for EL Collaborations
Read Post
Rich Cairn
Tools for Digital Literacy
Read Post
Rich Cairn
History eNews from Emerging America - January 19, 2023
Read Post
America and World Fascism: From the Spanish Civil War to Nuremberg and Beyond - ONLINE
View Workshop
What is fascism? Where did it come from? How does it impact human rights? What is anti-fascism and how did it arise? How did ideology shape the Spanish Civil Wa…
Online: Accessing Inquiry for English Learners through Primary Sources
View Workshop
Course runs March-April 2023, and introduces exemplars of best practice pedagogy for English Learners in History and Social Studies classrooms. It demonstrates…
Teach Disability History: We Can and We Must - An imperative for civic learning.
View Workshop
March 8, 2023 - 7-8pm Eastern Time