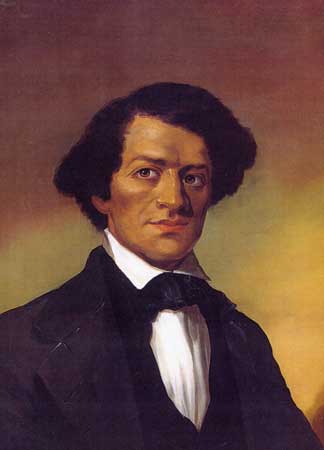 Frederick Douglass was born Frederick Augustus Washington Bailey, as a slave in Talbot County, Maryland in February of 1818. During the first twenty years of his life, his experiences matched those of many slaves. He lost his mother at the age of seven and never met his white father. He was moved frequently, and hired by one Maryland farmer who beat him severely. He learned to read in secret. Yet unlike many slaves, Douglass managed to escape to the North in 1838, using false identification papers provided by a free black seaman.

Douglass arrived in New York City and was assisted by the free black community there. He then moved to New Bedford, Massachusetts. Douglass began attending abolitionist meetings. He subscribed to The LiberatorThe Liberator was an abolitionist newspaper founded by William Lloyd Garrison in 1831. The Liberator was a weekly publication published in Boston for 35 years. Although it had a small readership, the Liberator gained nationwide notoriety for its demand for the immediate and complete emancipation of all slaves in the United States., and wrote, “No face and form ever impressed me with such sentiments (the hatred of slavery) as did those of William Lloyd Garrison.”

Garrison was equally impressed by Douglass, and encouraged him to speak at the Massachusetts Anti-Slavery Society’s annual meeting in Nantucket. Before his first speech, the twenty-three-year-old Douglass was nervous, but he wowed the crowd. He became a regular speaker at anti-slavery meetings and conventions across the North, gaining notoriety for his skill as an orator. During these trips, Douglass visited the NAEI and remarked on the spirit of equality among its members.

As a former slave who had learned to read in secret and managed to achieve success, Douglass was the ideal face for the abolitionist movement. In 1845, he published his autobiography, Narrative of the Life of Frederick Douglass, an American Slave, detailing his experiences as a slave. The narrative impressed Northern audiences – it became a bestseller and sold 11,000 copies in the first three years. Garrison acted as Douglass’ mentor, although the two activists eventually disagreed over the U.S. Constitution and its position on slavery. Yet they continued to share similar opinions on the immediate abolition of slavery and the equality of all peoples.

Douglass, like many activists of the period, supported the growing women’s movement and was a signer of the “Declaration of Sentiments” at the Seneca Falls Convention in 1848. Douglass published several anti-slavery newspapers, including the North Star. He was a friend and occasional advisor to Abraham Lincoln, encouraging him to release the Emancipation Proclamation. After the Civil War, he held many important posts, including director of the Freedmen’s Bureau; he was arguably the most famous African-American in the United States. In 1872, he moved to Washington, DC where he continued his fight for equality for women and African-Americans. In 1895, he died of a massive heart attack.

Relevant Date(s)
1818 - 1895
Northampton Association Member
No
Alison Noyes
PLC Update for EL Collaborations
Read Post
Rich Cairn
Tools for Digital Literacy
Read Post
Rich Cairn
History eNews from Emerging America - January 19, 2023
Read Post
America and World Fascism: From the Spanish Civil War to Nuremberg and Beyond - ONLINE
View Workshop
What is fascism? Where did it come from? How does it impact human rights? What is anti-fascism and how did it arise? How did ideology shape the Spanish Civil Wa…
Online: Accessing Inquiry for English Learners through Primary Sources
View Workshop
Course runs March-April 2023, and introduces exemplars of best practice pedagogy for English Learners in History and Social Studies classrooms. It demonstrates…
Teach Disability History: We Can and We Must - An imperative for civic learning.
View Workshop
March 8, 2023 - 7-8pm Eastern Time