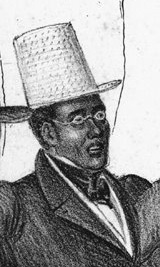 David Ruggles was born in Norwich, Connecticut in 1810 to free black parents. He moved to New York City at the age of 17, and opened a grocery. He became involved with the free black and abolitionist communities in the city, and joined the movement in 1833. Like other activists, he recognized that the most powerful tool accessible to him was the press. He began by canvassing for subscribers to The Emancipator, and by 1834 was writing regularly for the paper.

These activities led Ruggles and other black activists to form the New York Committee of Vigilance. Ruggles was a major participant in the Underground Railroad; he claimed to help over 400 slaves to freedom in the 1830s. The Committee of Vigilance supported the Underground Railroad by protecting free blacks and escaped slaves from the large number of slave catchers and kidnappers in New York City. Ruggles found many blacks safe passage to more northern destinations, including Frederick Douglass. Douglass wrote in his autobiography, “I was relieved from it by the humane hand of Mr. David Ruggles, whose vigilance, kindness, and perseverance, I shall never forget. … I had been in New York but a few days, when Mr. Ruggles sought me out, and very kindly took me to his boarding-house at the corner of Church and Lespenard Streets.”

As Ruggles kept up this frenetic pace of anti-slavery activity, he was losing his sight – by the age of 28, he was nearly blind. Friends in Massachusetts, David and Lydia Child, arranged for Ruggles to move north and live at the Northampton Association for Education and Industry. There, he began a successful water-cure facility in Northampton. Unfortunately, Ruggles’ hydropathic treatments were unable to cure his own ailments and he died in 1849.

Links
David Ruggles, leader of the Underground Railroad and long-time Florence, Massachusetts resident.  Member of the Northampton Association.  This site is a wealth of information on Ruggles and on the Association.  http://davidrugglesinflorence.blogspot.com/

Relevant Date(s)
1810 - 1849
Northampton Association Member
Yes
Alison Noyes
PLC Update for EL Collaborations
Read Post
Rich Cairn
Tools for Digital Literacy
Read Post
Rich Cairn
History eNews from Emerging America - January 19, 2023
Read Post
America and World Fascism: From the Spanish Civil War to Nuremberg and Beyond - ONLINE
View Workshop
What is fascism? Where did it come from? How does it impact human rights? What is anti-fascism and how did it arise? How did ideology shape the Spanish Civil Wa…
Online: Accessing Inquiry for English Learners through Primary Sources
View Workshop
Course runs March-April 2023, and introduces exemplars of best practice pedagogy for English Learners in History and Social Studies classrooms. It demonstrates…
Teach Disability History: We Can and We Must - An imperative for civic learning.
View Workshop
March 8, 2023 - 7-8pm Eastern Time