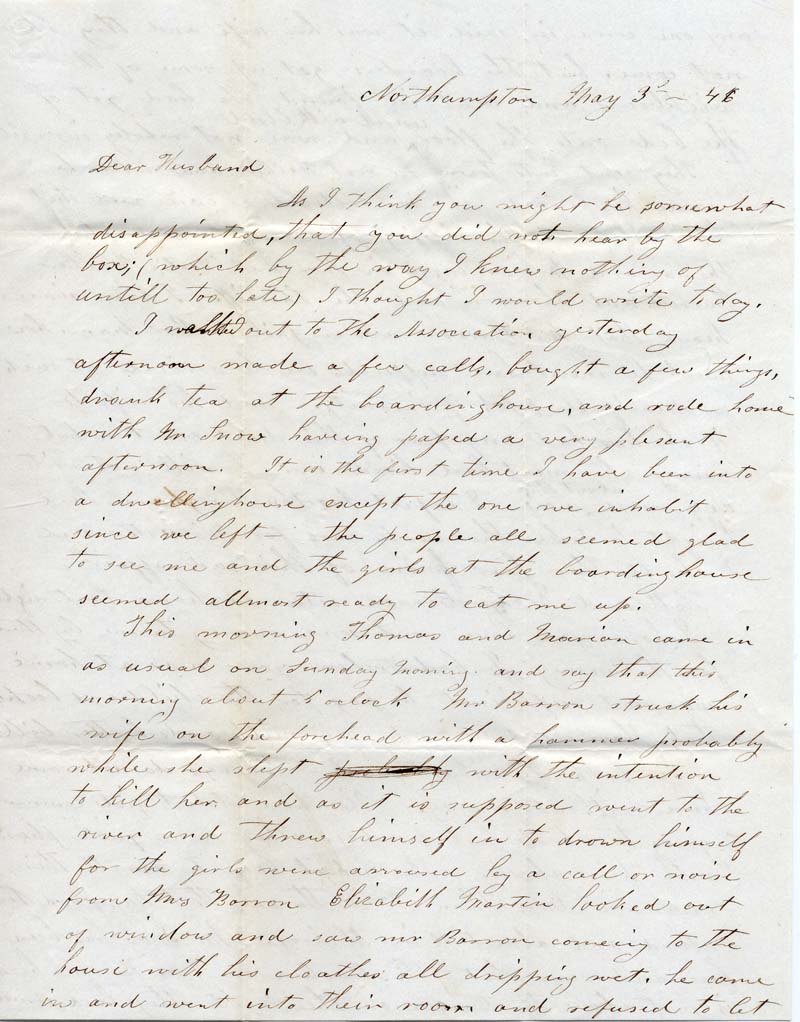 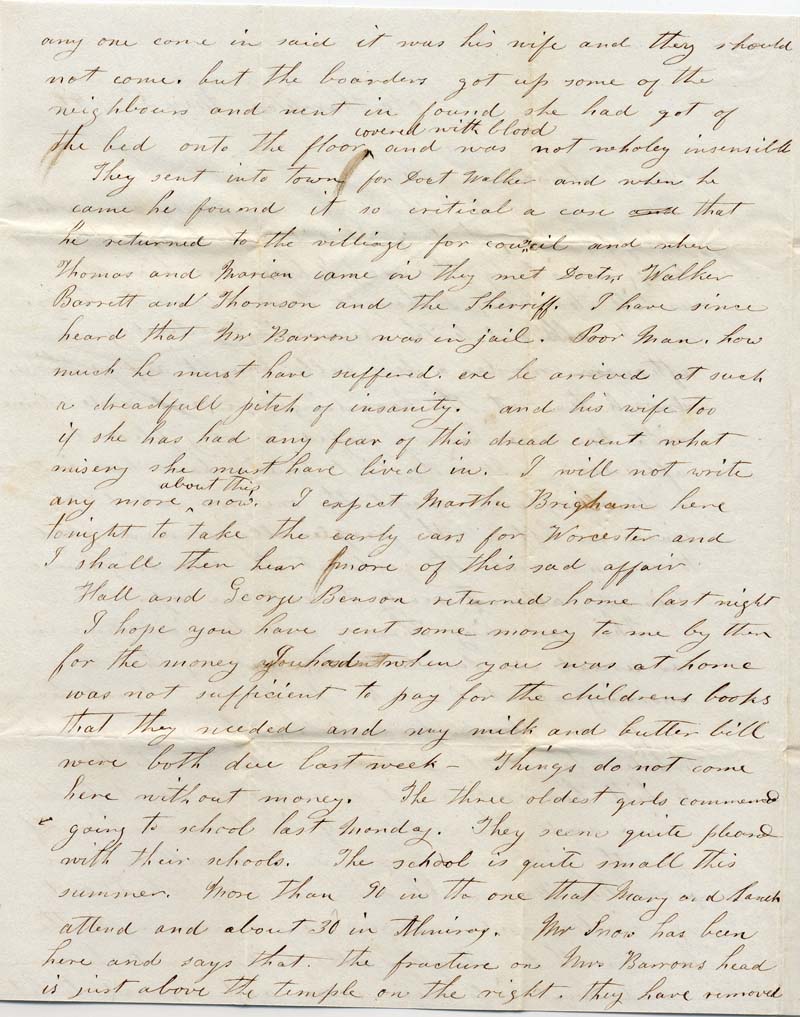 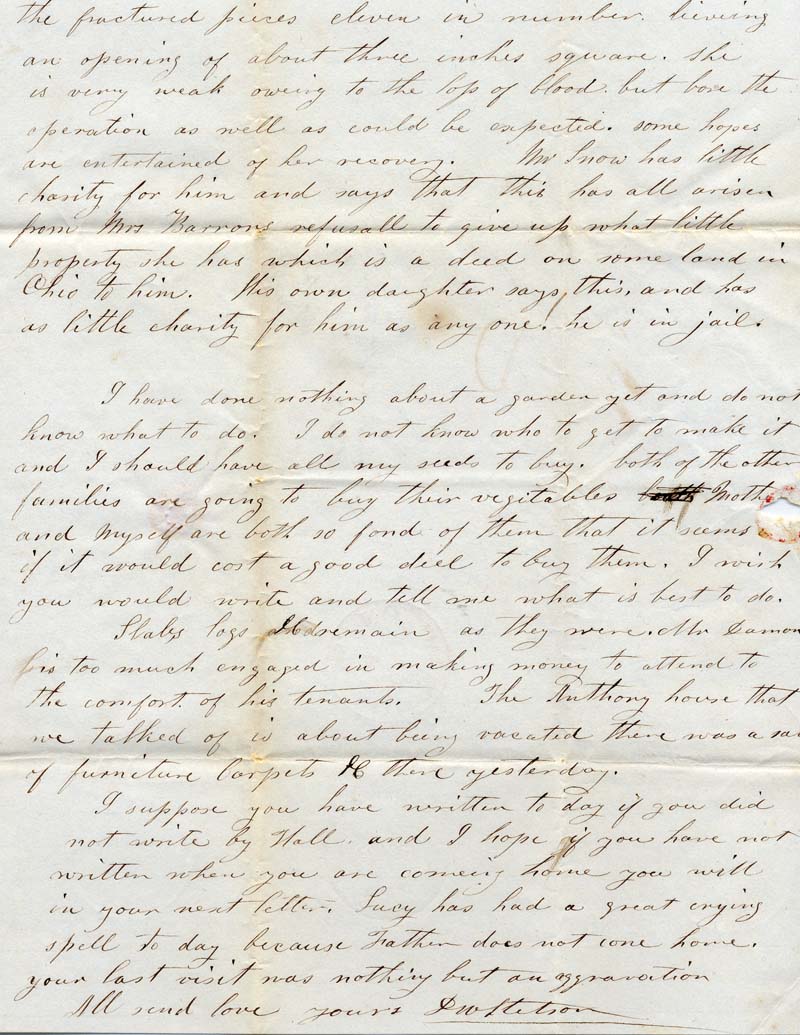 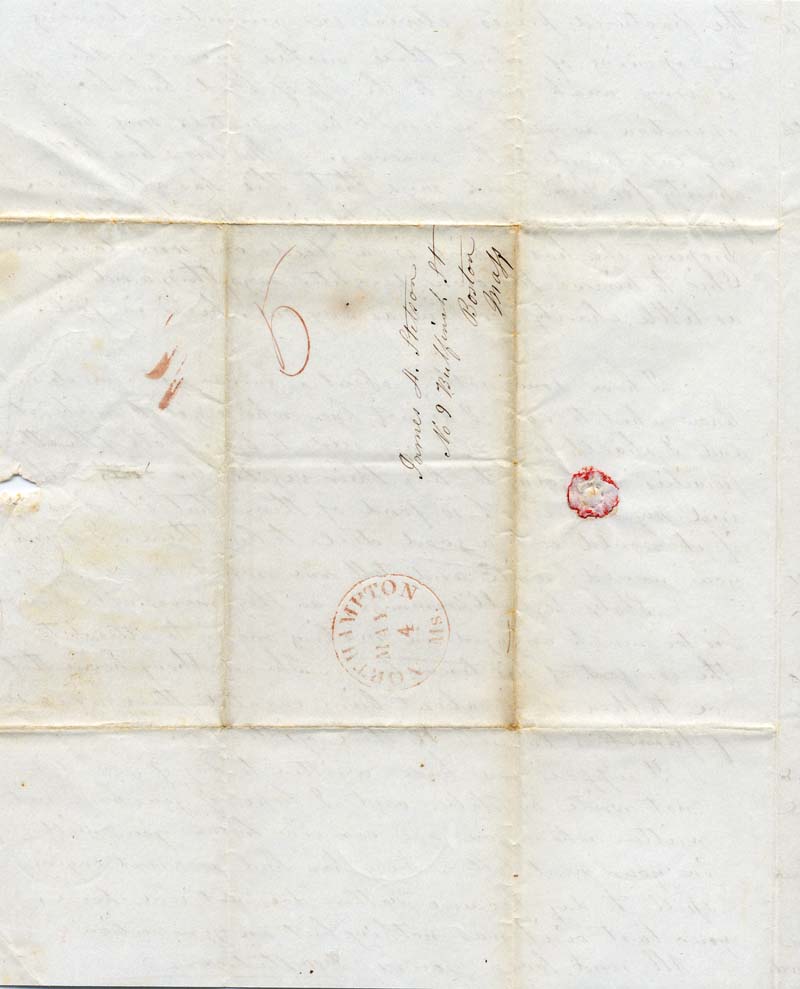 Dear Husband
As I think you might be somewhat disappointed, that you did not hear by the box; (which by the way I knew nothing of untill too late) I thought I would write to day.
I walked out to the Association yesterday afternoon made a few calls, bought a few things, drank tea at the boardinghouse, and rode home with Mr Snow haveing passed a very plesant afternoon. It is the first time I have been into a dwellinghouse except the one we inhabit since we left – the people all seemed glad to see me and the girls at the boarding house seemed allmost ready to eat me up.

This morning Thomas and Marian1 came in as usual on Sunday morning and say that this morning about 5 oclock Mr Barron struck his wife on the forehead with a hammer probably while she slept probably with the intention to kill her and as it is supposed went to the river and threw himself in to drown himself for the girls were arroused by a call or noise from Mrs Barron Elizabith Martin looked out of window and saw mr Barron comeing to the house with his cloathes all dripping wet. he came in and went into their room and refused to let any one come in said it was his wife and they should not come. but the boarders got up some of the neighbours and went in found she had got of the bed onto the floor covered with blood and was not wholey insensible

They sent into town for Doct Walker and when he came he found it so critical a case and that he returned to the villiage for council and when Thomas and Marian came in they met Doctr,s Walker Barrett and Thomson and the Sherriff. I have since heard that Mr Barron was in jail. Poor Man, how much he must have suffered ere he arrived at such a dreadfull pitch of insanity. and his wife too if she has had any fear of this dread event what misery she must have lived in. I will not write any more about this now. I expect Martha Brigham here tonight to take the early cars for Worcester and I shall then hear more of this sad affair2

Hall and George Benson returned home last night
I hope you have sent some money to me by them for the money I had when you was at home was not sufficient to pay for the childrens books that they needed and my milk and butter bill were both due last week – Things do not come here without money. The three oldest girls commenced going to school last Monday. They seem quite pleased with their schools. The school is quite small this summer. More than 90 in the one that Mary and Sarah attend and about 30 in Almiras. Mr Snow has been here and says that the fracture on Mrs Barrons head is just above the temple on the right. they have removed the fractured peices eleven in number lieveing an opening of about three inches square. She is very weak oweing to the loss of blood but bore the operation as well as could be expected. some hopes are entertained of her recovery. Mr Snow has little charity for him and says that this has all arisen from Mrs Barrons refusall to give up what little property she has which is a deed on some land in Ohio to him. His own daughter says this, and has as little charity for him as any one! he is in jail.

I have done nothing about a garden yet and do not know what to do. I do not know who to get to make it and I should have all my seeds to buy. both of the other families are going to buy their vegitables both Mother and myself are both so fond of them that it seems [as] if it would cost a good deel to buy them. I wish you would write and tell me what is best to do.

Slabs logs &c remain as they were. Mr Damon is too much engaged in making money to attend to the comfort of his tenants. The Anthony house that we talked of is about being vacated there was a sale of furniture Carpets &c there yesterday.

I suppose you have written to day if you did not write by Hall, and I hope if you have not written when you are comeing home you will in your next letter. Lucy has had a great crying spell to day because Father does not come home. your last visit was nothing but an aggravation
All send love yours DWStetson